Both green and black tea have excellent health benefits. Each is derived from a shrub (Camellia Sinesis), but thanks to differing methods of processing, they have distinctively different flavours. With black tea, the leaves are withered, rolled and heated. They are then allowed to ferment before the final heating process.

Drunk in moderation (2 – 3 cups per day), black tea can really complement a healthy/clean eating lifestyle, but remember – in order to really maximise the tea’s benefits, it should be drunk without sugar, milk or sweeteners!

Benefit 1: Your Oral Health Will Be Good

Studies suggest that black tea has the ability to reduce plaque formation on the teeth. In addition, it restricts the bacteria growth that promotes the formation of cavities and tooth decay.

Benefit 2: You Lessen The Risk of A Stroke

Strokes are not just for older people – anyone is at risk of a stroke, although there are certain factors that will influence it. Obesity is one factor, as is smoking. As we age, the likelihood increases too. And unfortunately, race is another factor with African American, Alaska Native, and American Indian adults suffering more than their white, Hispanic, or Asian American counterparts.
However, there is good news. A respected study from 2009 demonstrated that, regardless of your origin, individuals who consume 3 or more cups of black tea had a 21% lower risk of a stroke than people who those who consumed just 1 cup of black (or green) tea per day. Time to get the kettle on!

Benefit 3: It Works As A Stress Reliever:

Think of this tea as a clarifier and/or a calmer. It will help aid your concentration during a busy day, and when consumed regularly in moderate amounts, it will also lower the stress hormone cortisol – allowing you to relax.

Benefit 4: Your Digestive Tract Will Improve:
In addition to improving your immune system, tannins contained in the tea also have a therapeutic effect on gastric and intestinal illnesses, helping to decrease and also digestive activity.

When scientists studied a group of elderly Mediterraneans, data revealed that those who had consumed black tea on a long-term basis on a moderate level (i.e 1-2 cups a day) had a 70% lower chance of having or developing type 2 diabetes.

Studies have also indicated that regular black tea drinkers have stronger bones and a lower probability of arthritis in the future, due to the phytochemicals found in tea. Tea contains polyphenols, plant derived compounds that assist your immune system and can protect against disease such as arthritis 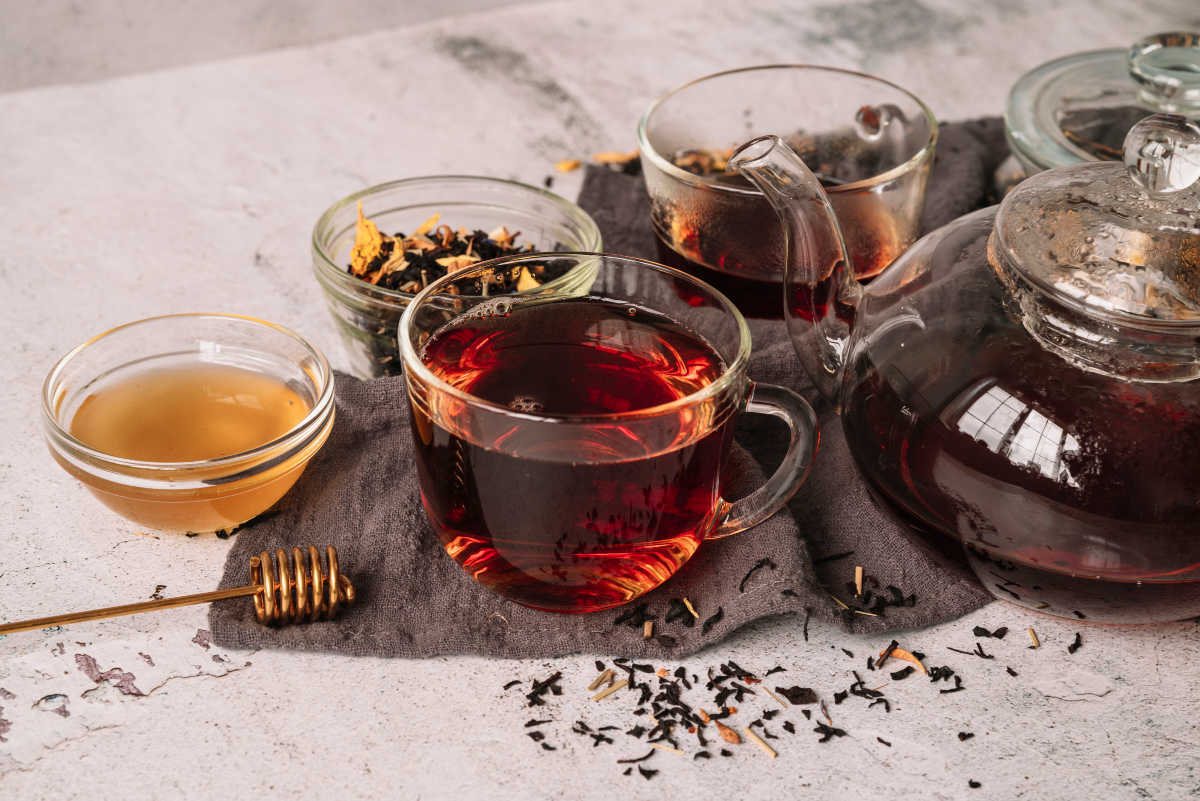 Benefit 7: It’s A Source Of Antioxidants

Containing polyphenols, (antioxidants that help block DNA damage associated with tobacco or other toxic chemicals) these vary from the ones we’re more familiar with which are obtained from fruit and vegetables. Therefore, combined with fruit and veg, it’s a great combination as part of a healthy lifestyle.

Benefit 8: A Boost For The Immune System:

Black tea contains alkylamine antigens that help boost our immune response. In addition, the tannins it contains have the ability to fight common viruses like influenza and stomach flu.

So there we have it – 8 great reasons to drink black tea on a regular basis. Make sure you buy good quality tea, and if possible use filtered water when you make a brew. That way you’ll achieve the perfect, healthy cup. Enjoy!